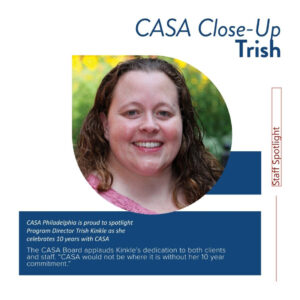 CASA Close-Up is happy to be back with a new profile! Very fittingly our first profile since COVID is with Trish Kinkle, CASA Program Director, who is celebrating her 10-year anniversary on staff at CASA Philadelphia!

Tell us the story of getting started with CASA.

My journey to CASA is a rather winding road. At the age of 24 I became a foster mom to 4 children who lived down the street. I was friendly with the family and when the girls told me that DHS was threatening to take the kids from their mom, I naively asked if they could live with me. I ended up having the 4 kids live with me as an “family arrangement” for 6 months.

The experience made me aware of how poorly the needs of kids and families were served in the system and I went looking for a way to help make a difference. I found CASA. At the time CASA Philadelphia had just 2 full time staff and 3 part time staff working on a shoestring budget with very little visibility in the family court. I remember going over to the court with rolls of quarters to get court orders and make copies on their public copy machines!

Soon I realized this was a field that I was passionate about, so I returned to school to get a social work degree, and I’ve been here ever since!

What about CASA has kept you connected for an entire decade?

I thinking knowing first-hand the incredible impact that a CASA volunteer can have on the entire future of a child’s life is a very powerful thing. I can’t imagine a career that is more rewarding than supporting people who are caring enough to volunteer their time to make the world a better place for a child who is suffering.

During these 10 years it has been my pleasure to watch CASA thrive. We now have 8 full-time and 3 part time staff supporting nearly 100 volunteers. We have moved to larger better functioning offices. We enjoy an amazingly strong relationship with the court (no more making copies with quarters!) as well as the entire Philadelphia legal and child welfare community.

I can imagine you have so many stories of children over the years – are there any cases that particularly stay with you?

Years ago, I was the supervisor on a case of a young boy who had been moved many times and really struggled until landing with a single man who really clicked. The case was super complicated and efforts to terminate parental rights dragged on so long that the foster dad felt overwhelmed and eventually, begrudgingly, asked that they find a new home for him. The next placement was far from ideal. I remember the volunteer going to the home and the two other children in the home were playing video games and when asked why he wasn’t joining in the little boy said the games only belonged to the bio children. It broke our hearts. We decided immediately that this boy needed to move, once again. During this time, parental rights were terminated and the case moved to a new worker. When talking with the worker about possible placements for the child, the volunteer and I suggested that it might be worth calling the former foster father to see if he might be interested in having the child back in his home now that the case was much less complicated. The worker agreed, and when she contacted the former foster father, she had barely finished her sentence and he exclaimed, “Bring my son home to me!” He expressed to her that he had been missing the boy so much and had felt that asking for him to be moved was one of the worst mistakes of his life. When the worker when to pick up the boy and told him where he was going, he burst into happy tears and cried “I miss my Dad.”

I think this particular case sticks with me because had the CASA not gone and seen firsthand the living arrangement and known the prior placement’s success, the most beautiful adoption might never have happened. It’s a great CASA success story.

What are your hopes for the foster care system and for CASA in the next decade?

It is my fervent hope that the child welfare system becomes more family centered, providing services and supports to families so that far fewer children end up in out of home care. I envision some day when a CASA is assigned at the beginning of a family’s struggles and we can be the source of support and advocacy that empowers them to stay together and thrive as a family.