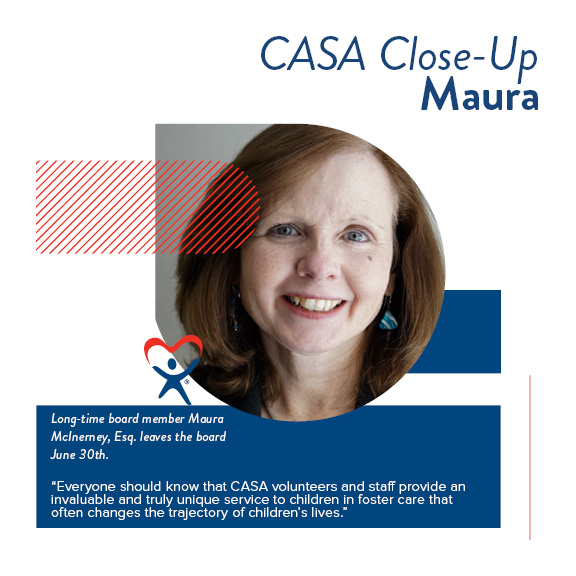 Maura McInerney, Legal Director at The Education Law Center has been a litigator in the private and public sectors for over twenty-five years. In addition to leading ELC’s litigation efforts, Maura engages in legislative and policy work at the national and state level and is recognized as a national expert on laws involving the education rights of children who are homeless and those in foster care. She helped found and represents ELC as a member of the national Legal Center for Foster Care and Education. In 2012, Maura was named Child Advocate of the Year by the Pennsylvania Bar Association’s Children’s Rights Committee for her work on behalf of children in foster care. She has also received the Unsung Hero Award from the Legal Intelligencer for her litigation on behalf of students experiencing homelessness. Maura graduated from Fordham Law School in 1988.

Maura joined the board of CASA Philadelphia in 2009. Her impact on CASA has been extensive as she has helped shepherd the growth of CASA Philadelphia, which was established in 2006 with just one volunteer. Today as Maura leaves the board CASA has a staff of 11, nearly 100 active volunteers and serves more than 350 children a year. As Maura leaves the board this month, CASA sat down with Maura to get her perspective on her time with Court Appointed Special Advocates.

How did you first get involved with CASA of Philadelphia? I learned about CASA through my past work as an attorney in the dependency system and my employment as an attorney at the Education Law Center (ELC). I was always incredibly impressed with CASA volunteers who called ELC. They were and are knowledgeable, committed, amazing and zealous advocates for the children they serve and represent.

As Legal Director for The Education Law Center you work with many non-profits, what makes CASA special in your mind? CASA is an exceptional organization and enjoys a stellar reputation among non-profits as an effective and knowledgeable voice for the children CASA serves. CASA plays a central role in child welfare reform efforts and is a strong partner with other non-profit organizations. CASA’s Executive Director, Happi Grillon, is recognized as a strong leader and thoughtful strategic thinker. In addition, CASA’s positive reputation is amplified by its highly skilled supervisory staff and effective CASA volunteers.

What has been your role on the board of directors? I have been a member of the Board since 2009. I became Vice President in 2013 and served as Board President from 2016 to 2020. I have loved serving on the Board and it was an honor to work with and on behalf of such a wonderful organization.

What do you think is one thing everyone should know about CASA? Everyone should know that CASA volunteers and staff provide an invaluable and truly unique service to children in foster care that often changes the trajectory of children’s lives. Because it is a voluntary role and outside the “system” CASA volunteers often have more detailed knowledge about the needs of the child and the child’s family and interact with multiple systems that impact that child’s life. The recommendations CASA volunteers provide carry significant weight with courts and ensure that children receive what they truly need. I have been so inspired by the commitment and insights of CASA volunteers who support children in the most vulnerable circumstances. Their support is critical to permit a child to envision a better future.

Can you talk about CASA developing the EDM program and why that is so important? And why was CASA a good fit to provide this service? The PA Juvenile Court Rules changed in 2011 to expressly authorize a court to appoint an Educational Decision Makers or EDM for children in foster care when a child has no one in his or her life to serve in this role. This issue came up often for youth in residential placements. ELC strongly supported this Rule because we knew at that time many children were languishing in inappropriate school placements and were not receiving needed supports. The Rule’s comments reference Guardian Ad Litems and CASAs as examples of individuals who could fulfill this role. As a lawyer at ELC, I have trained CASAs in Philadelphia and I think CASA volunteers are well positioned to serve in this role because they are dedicated to the child, take the time to know and understand a child’s educational needs, and have a strong knowledge of the multiple systems impacting the child as well as the skill set to navigate in schools. At ELC, we have had many successful outcomes for children in foster care which have started with a call from a CASA volunteer or staff member.

Where do you see CASA going in the future? I see CASA expanding its reach by serving more children in Philadelphia and continuing to be a leader in needed child welfare reform efforts to address systemic and structural racism.

What are you most proud of in regard to your work at CASA? I am proud that the Board has become larger, more diversified, and is able to play a strong role in the organization. I am also proud that the Advisory Board was created and will continue to expand in coming years.