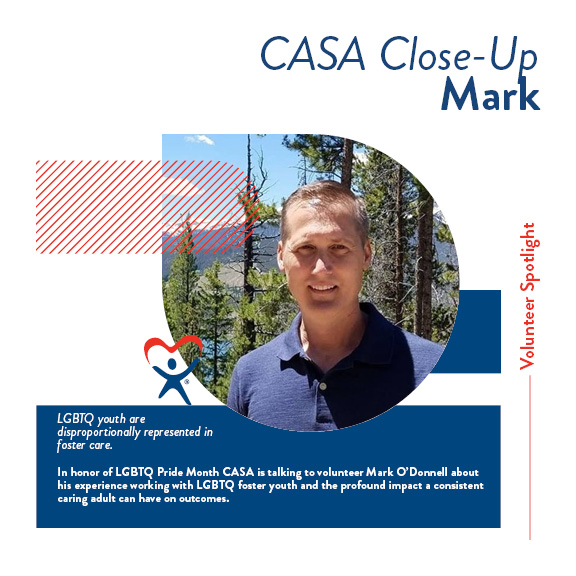 In honor of LGBTQ Pride Month CASA is talking to Volunteer Mark O’Donnell about his experience working with LGBTQ foster youth and the profound impact a consistent caring adult can have on outcomes.

What made you decide to become a CASA?

I had a profoundly challenging childhood of my own, which probably ignited the initial spark. I also knew the need was immense–but I didn’t realize quite how immense until I attended the training and started taking cases. There are many people/players in the child welfare system, but everyone has their limited role(s) and the most glaring deficit is a common factor–one person who’s paying attention to all of the pieces and able to speak up if someone or something is falling short of supporting these children properly. If done well, the CASA and EDM roles fill this void in a thoughtful and diplomatic way. That really spoke to me.?

June is LGBTQ Pride Month, and as know, LGBTQ youth are highly over-represented in both the foster care and juvenile justice systems.  You work with 2 teens who identify as LGBTQ, tell us how their sexuality has further put them at risk in the system?

Wow–where to begin? LGBTQ youth are subject to discrimination on multiple fronts, and in many cases starting with their families (either nuclear or extended). From there, their faith-communities sometimes take a dim view or send mixed messages. And finally, they are almost invariably subject to some level of harassment in school settings. It’s particularly challenging in large public-schools as there are limited counseling resources and only the ability to respond to the most serious infractions. With this in mind (and an unfortunate history of truth on all 3 fronts for both of my assigned cases), I made it my mission to help secure supportive foster homes and move my clients into LGBTQ-friendly schools, at which point they began thriving this past year.??

What is the current status of your cases?

I currently have 2 cases–both of which have undergone multiple foster placements in the course of the past year, which (as you can imagine) was an incredibly destabilizing force each time a change occurred. Nonetheless, thanks?to some hard work and luck both students secured scholarships to attend small, supportive private schools which helped immensely. One of my cases has been reunited with his mother after a tumultuous year, and (a little surprisingly) his mother requested that I be allowed to remain on the case for as long as possible as I have continued to mentor him and work toward providing educational opportunities outside of his home (catchment) school placement. My other (highly challenging) case is pending a move out of state to a residential school with special services for transgender youth, at which point my engagement will wrap up.?

What has most surprised you about working as a CASA?

First, I was initially surprised (shocked, even) by how many opportunities there are for things to fall through the cracks, particularly at the hands of the Community Umbrella Agencies (“CUAs”) who manage the social work for the city. It would be easy to lay blame on these folks as they often drop the ball and almost never seem able to provide the level of service and care that they’re tasked with. However, after working closely with CUA social workers, it has become clear that these shortcomings are the result of more systemic problems–foremost a ratio of social workers to cases that is woefully inadequate. After getting to know several CUA workers, my impression of these individuals (almost universally) has been of good-hearted people, working very hard, in somewhat impossible circumstances.?

Second, and related to the above realization is how a system (no matter how large or well-staffed–if that were ever the case) can’t ever fully take the place of a (functional) family. Children’s needs are almost limitless–physical; emotional; educational; legal; just to name a few. Reasonably-well-resourced families can (and do) attend to this broad range of needs and are able to pivot from one to another as needed, on a moment’s notice. And while many of these functions can (arguably) be replaced by well-intentioned people, the foster care system is really only able to provide the basics (on a good day). We as CASA are able to help raise that bar (and we unquestionably do), but it’s important to calibrate our expectations before going in, as the level of care and services may never rise to a level that we feel is needed.

Third, I have (quickly) come to learn a LOT about childhood trauma; the absolute pervasiveness of it in foster children; the responses it can elicit (including self-sabotage); and the complexity (and sheer lack of resources) required for treating it.?

And finally, on a more personal level, I underestimated my own emotional responses as I began my volunteering. I was drawn to this work in part by my own very challenging childhood, which I somehow overcame and which compelled me to want the same for other children in similar (or likely worse) circumstances. What I didn’t foresee is the depth of what that would awaken in me; how childhood trauma gets carried into adulthood; and how it can sometimes prove difficult to maintain a clear head and steady hand as I found myself triggered alongside the children in my case. On a few occasions, I admittedly brought an unproductive level of emotion to the work and ruffled a few feathers when some (crucial) needs were not being met for my cases. Alex, my CASA/EDM Supervisor proved helpful, patient and understanding as I navigated these waters, for which I’m grateful. It’s a good reminder to anyone who is considering becoming a CASA, know that as a CASA you are not alone in your work, you always have professional staff to support you. ?

Has your perception of the foster care system changed from being a CASA?

I wouldn’t say that it’s changed so much as I feel like I now understand it better, and no longer ascribe to the widespread, broad-brush notion that foster care systems are “broken”. The real truth is that it’s a system trying to take the place of a family, and those things are apples-and-oranges. The system isn’t “broken”, it’s just not (and will never be) as well-equipped. But many hands make lighter work, and the CASA role (maybe more than any other) can make a REAL difference in the lives of individual children.

On a final note, my favorite story from the last year has been a comment by a 14-year-old I was assigned last March, a few weeks after he entered foster care. Within the first 4 months of knowing him, he was on his 4th CUA worker; his second attorney and his third (city) social worker. Around that time, he turned to me one day and told me how grateful he was, and that I was the only person who’d been there for him since the beginning. (Again, it had been all of 4 months!). It has now been 14 months, and there have been 3 more social workers, and another change of attorney…and…I’m still here! This case will probably wrap up within the next few months as he leaves the system, but I expect to remain in his life for as long as he needs me…as a mentor and friend. And I will remain eternally grateful for the opportunity to support this young man through a tumultuous year, and to watch him grow and thrive as a result.?