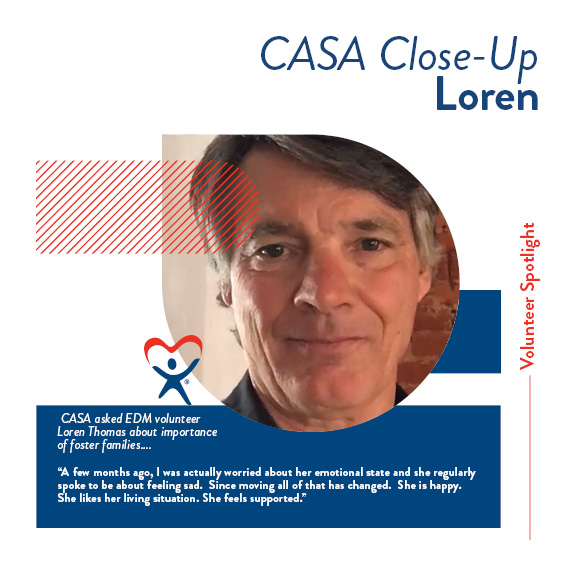 What made you decide to become a CASA volunteer?

Volunteering with CASA has been on my mind for many years.  In my work as a school principal and district superintendent, I became aware of the very important role that CASA staff and volunteers played in the lives of some of my most vulnerable students.  On a few occasions I participated in volunteer training by explaining school district services and how CASA’s could best represent the needs of students to school staff.  Upon retirement I knew that I wanted to continue to work with children.  I also feel quite committed to Philadelphia and am aware of the significant need for support of foster children in my city. So, it seemed very natural to apply to be a CASA volunteer and to work as an EDM (educational decision maker).

Has the experience been what you expected?

The training component was actually more than I expected.  While I knew the time commitment, I was unaware of how much I would learn.  I found it well organized and think that the training gave significant information on a wide number of issues and helped develop important skills.

I completed training in fall of 2019. The amount of work I have had as a CASA volunteer has actually been less than I had imagined.  Probably that is mostly due to the impact of COVID. But, qualitatively, the experience has been wonderful.  My student and I have developed a relationship based on trust and communication.  I have seen wonderful progress related to her residential and school placement.  So, from this perspective being a CASA volunteer has brought about far more joy and satisfaction than I had imagined.

I should also say that is was a pleasure meet other volunteers during training.  And, it continues to be a joy working with CASA staff and having conversations with other volunteers now.  I participate in the Zoom conversations and find them helpful and uplifting.  And, my EDM supervisor, Mae, is exceptional.  She always gets back to me with what I need.  She sends gentle reminders.  I find working in a positive and supportive environment to be a very positive aspect of volunteering with CASA.

What would you tell someone considering becoming a CASA?

First, I would encourage anyone to volunteer with CASA.

But, then I would caution people to volunteer because you want to and because it is the right thing to do.  Of course, we all do things because we think that they will bring us joy or happiness or satisfaction.  And, being a CASA *probably* will.  But, it may not.  Sometimes things do not go well, things turn out badly, we may not be welcomed by CUA workers, our opinion may not count.  But, none of that should be our focus.  Doing what is right for children is our focus and our hope is that we help.

Finally, I would say that there is probably nothing more meaningful to do or more valuable than supporting the needs of children – particularly the abused and neglected kids embroiled in the court system – those who need us most.

Your current case is an English Language Learner (ELL) teen with an infant, how has your ability to speak her native language impacted the case?

I work with a young woman who turned 18 in February. *Amy (*not her real name) also has an infant of whom she has retained custody. Her primary language is Spanish.  I think that she understands more English than she thinks but she doesn’t speak English and is intimidated by being surrounded by English-only speakers.  I always speak to her in Spanish.  Now that she has a phone and email, we talk, write, text in Spanish.  I think that my ability to speak her language has facilitated communication.  But, that is only one level.  More importantly it has made her feel comfortable and accepted. Amy told me how terrible it was to have a CUA social worker who did not speak Spanish.  They simply could not communicate.  Having recently returned to the US after being director of a school in Costa Rica, I find that speaking Spanish with Amy feels good to me as well.  Hopefully she knows that we are doing everything we can to reach her.  I should also note that her child advocate attorney speaks Spanish also.  Together I feel like we provide a very supportive team for this student.

May is Foster Care Awareness Month. In your case your CASA kid was in a residential facility and then moved to a foster home, how has being in a foster home impacted her progress?

It would be an understatement to say that moving into a foster home completely changed everything for Amy.  She was able to move from very rural PA back to the city of Philadelphia.  She now has others around her who speak her language. There was literally no one who lived near her when she was in a group home with whom she could communicate.  There were no bilingual teachers.  There was one student in her entire high school who was a native Spanish speaker.

Additionally, she is now living closer to her baby’s father and his family. She has a good relationship with them and they want to be involved in her baby’s life.  A few months ago, I was actually worried about her emotional state and she regularly spoke to be about feeling sad.  Since moving all of that has changed.  She is happy.  She likes her living situation.  She feels supported.  I would say that her emotional life was dramatically impacted for the better by moving into a foster home from a group home.

Educationally, the impact is beyond dramatic.  I learned in conversations with school authorities where she had been that my student would not have graduated this year and would have needed an additional year of high school. I am almost certain that she would have left services and become a non-English speaking immigrant with a baby with no high school diploma.  Due to her move, she is in an appropriate placement that is designed for student in her circumstances.  She is on-track to graduate this year.  She is happy about that.

I believe that in every way, moving from a group home to foster care has given my student chance to succeed.  And, it has made her happier.

Do you have a sense of how this case will close? Do you feel like you have made real impact on her case?

I am confident that Amy will graduate from high school at the end of the 2020 school year.  She has voluntarily extended her care, which has been a good thing for her and her child.  I think that when she does age out she will leave into a supportive network of friends and her baby’s father and his family.  My hope is that she continues her education at the Community College.  I think that she will have the skills do so.

Everything leads me to believe now that this case will close successfully and that this fine young woman will have the opportunity to create a very positive life for herself and her baby in the United States.